Note: This is an adaptation of a video tutorial made for MediaBistro.com. 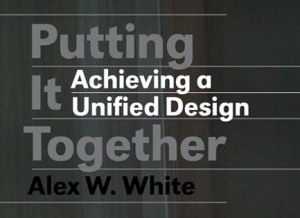 “Unified design” blends all its parts to make a single impression. It is more visible and potent than it’s flabby alternative: a bunch of individual impressions.

When you cook, you must know ingredients: what they are, how they behave, what makes them delicious, even what people expect. Fine cuisine requires more than just choosing the vegetables and picking a cut of meat. The vegetables, for example, must complement the meat’s flavor and texture.

When you design, you use just three ingredients no matter what kind of design you do: 1) image, 2) type, and 3) space. The designer’s job is only begun when choosing a typeface or a picture. What matters most is blending the design’s multiple flavors so they work together. That is design unity.

Image, type, and space are the visually unrelated ingredients (left) we blend into a single message by giving them design unity (right).

Design’s purpose is to make the message noticeable, and to make its value immediately evident to the uncommitted browser. A single visual statement is more visible and potent than a mere assembly of random bits that have little or nothing in common. The determining factor is not the parts being used, but the quality of the relationships among those parts.

The three elements (image, type, and space) seldom have anything in common in terms of visual form. Clever design is balancing contrasts and similarities among unlike parts. Each part should share some attributes with the others, but retain a degree of useful contrast to provide visual energy.

“Unity contributes orderliness and coherency and a civilized state of things generally. Whereas the contrast family are all savages, more or less.” – William A. Dwiggins, graphic designer and typographer, 1880-1956

Without similarity, it is impossible to create an environment of quietness so that important elements can be seen.

Without contrast, a design will be dull, gray, and almost certainly unnoticed as a visual message.

Relating image and type can take many forms. Here, an intentional decision to contrast type and image (left); and placing text with vertical and horizontal baselines around the image makes the type visually agree with the roughness of the boulder-in-the-trunk image (right).

Problem 1: What pieces to use?

Problem 2: These pieces don’t have much in common.

Image is an easier way to convey meaning.

Space is the antithesis of the other two elements.

The starting point in design is usually material that doesn’t relate except in meaning. Our job is to make them visually relate, giving the totality design unity, so the message gains visibility and potency.

The choice of imagery is never random but purposeful. The meaning and composition of the image is understood to be paramount. Types must be chosen with similar consideration. It matters a great deal that the type has something in common with the imagery.

Type becomes image – is forced into the image – in the two examples on the left. An extensive range of pharmaceutical support materials have image-dominant and limited color palette similarities forced on them for branding consistency (right).

The difficulty of technology is that it makes choices just about infinite.

In the absence of limitations, random choices are inevitable — and merely adequate design is often the consequence. Narrow your choices deliberately to force visible relationships. Here are a few to get started. These techniques are arbitrary and serve to focus creativity and thinking. There are nearly an infinite number of ways but they all intend to define a more specific problem and apply a treatment to all elements similarly, so they look like they belong together.

Great design has clearer relationships which make the message look predigested. A vertical strip of image has been posterized into green and white to align with the product shot (left). Both image and type have been damaged and bled and overexposed to give them design unity in this ad for an aluminum water bottle (right).

Defining the quality of design